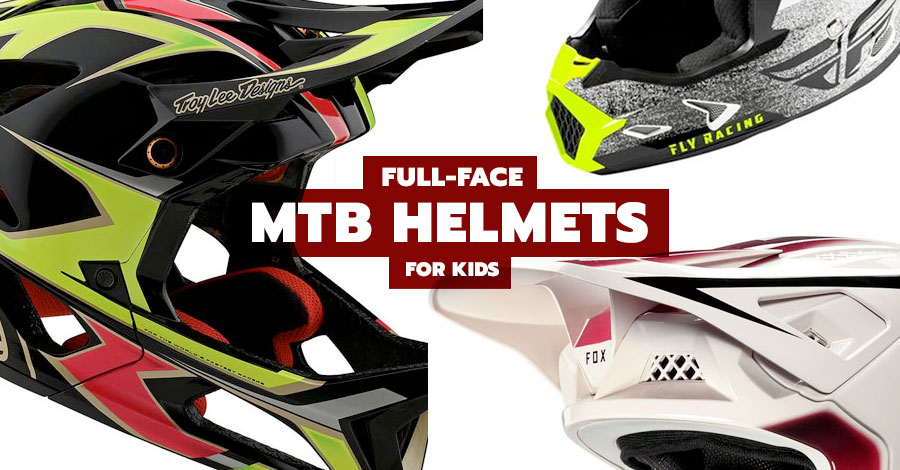 Your young rider will love the Zoka Full-Face Helmet. The Zoka is a great choice, whether they’re tackling new trails, enjoying downhill laps, or racing BMX. Its full-face design offers optimal protection, including EN 1078 and CPSC certifications for safety. The adjustable moto-style visor lets them find their perfect tilt. The anti-odor pads keep everything fresh. This helmet comes in sizes that will fit heads that are 19.7 inches to 20.9 inches.  The Kali Protectives Zoka also comes with additional padding if your kiddo likes a snugger feel. One of our favorite full-face mountain biking helmets for kids.

The 100% Status Jr. Downhill/BMX Youth Helmet is designed for safety. Its exterior consists of lightweight fiberglass, making it comfortable to wear. The interior, most of which is made of EPS foam, also has a removable liner that can be tossed into a washing machine for easy clean up after riding on a hot day. The cheek pads and chinstrap liner are also removable and washable, ensuring that no matter how messy things get, the helmet will look as good as new.

Speaking of the way the helmet looks, it’s available in three color combinations: Kelton Blue, DDay White, and Black Meteor. There are three different sized outer helmets to choose from, youth small, youth medium, and youth large, and the interior section comes in two different sizes for a snug fit. The visor is completely adjustable, and it screws into place so that it won’t come loose while your child is riding. On top of this, the helmet is compatible with a number of different emergency release systems. One of our favorite full-face mountain biking helmets for kids. There’s a reason by the Fox Racing Rampage Youth Helmet has such an important (and winning) pedigree – it combines safety features with lightweight construction in several snappy colors, such as atomic punch, indigo and olive green. Available in sizes youth small an youth large, the Rampage Youth leaves no safety “stone” unturned. There’s liquid in between the inner EPS foam lining and the outer shell, protecting the brain from impacts. The magnetic visor is designed to detach during a crash, thus keeping landings from being even more damaging.

The helmet comes with mesh screens protect the face from insects and kicked up debris while riding, and there are intake and outtake ports located at various points to allow for plenty of comfortable airflow. Speaking of comfort, the inner liner is completely washable, and it wicks away moisture.

Doe your kiddo race BMX, rip the downhill, or love to get big air? If so, this might be the helmet for them! The M1 Youth Helmet provides full face protection for BMX racing or when your favorite shredder hits the bike park. This full-face helmet has a lightweight polycarbonate shell.  The large eye port offers an optimal field of vision. Additionally, seventeen air vents make for high breathability. The M1 Youth full-face helmet was thoroughly tested beyond CE, CPSC, and AS standards.

Make sure your kids have proper, well-fitting head protection.

Knee pads are another level of protection for young riders.

Is your kid big enough to carry their own water and supplies?

What Is MIPS? What Does MIPS Do?

MIPS, which is short for Multi-Directional Impact Protection System is found inside of helmets designed for mountain biking and other pursuits. You can tell which helmets come with a MIPS system because they have a yellow dot on them, usually on the back, that often contains the system’s initials.

Why is MIPS important? The system kicks in during a crash, protecting the brain from rotational forces, particularly during angled impacts. These rotational forces are dangerous because they can tear brain tissue, leading to swelling, bleeding, and increased pressure. According to studies, most crashes lead to an angled impact, yet many traditional (non-MIPS) helmets aren’t tested for them. As a result, preventable brain injuries can occur, which is why it’s best to wear a MIPS helmet.

The system consists of a BPS, or Brain Protection System, usually hidden behind additional padding. The system allows the head to move inside of the helmet during a crash. When your head is stationary and unable to move, all of the rotational force produced by the crash is transferred to the brain. With MIPS, these forces are dampened, thus preventing brain injuries.

Check out our other favorite mountain bike gear and accessories on our Reviews page.

Eight Reasons Why You Should Go To Whistler During Crankworx

Eight Reasons Why You Should Not Go To Whistler During Crankworx

The Best Mountain Biking Shorts And Pants For Kids

The Best Enduro Helmets For Kids
Scroll to top