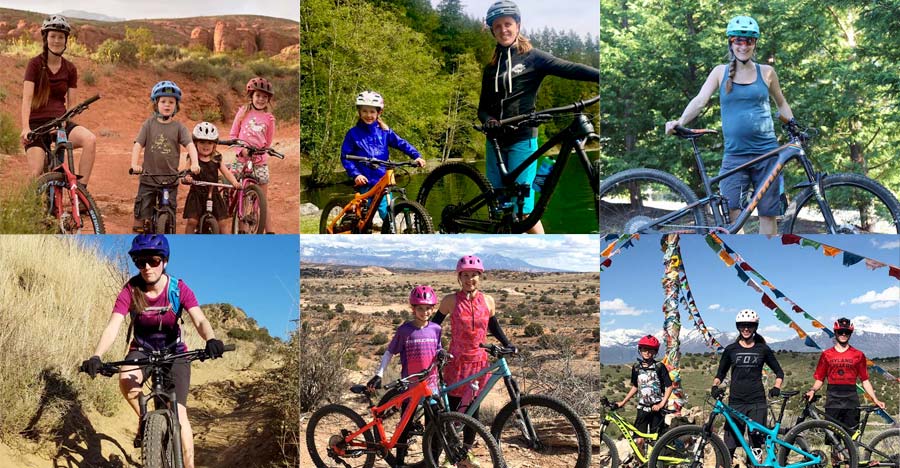 Happy Mother’s Day to all the mountain bike moms! We love those moms who enjoy mountain biking and/or encourage their kids to ride. Let’s take a look at what some of the moms are riding this season. Many thanks to the moms for taking time to share the photos and words for this post. We hope you enjoy your ride today!

Kaylee Gibb And The Pivot Mach 6

Kaylee Gibb and her three children. Photo by Ryan Gibb.

With the first child we decided to drop some coin on a little Giant strider – knowing more kids would get to use it! Well the drunk lady who drove through the yard and ran it over had different ideas. After pulling it out of the ground and un-bending a few parts, we adding some trike handlebars to it. That fixed it! That strider has now been passed on to the third kid! Worth EVERY penny.

The moment they can glide – they can pretty much pedal with a few tries on a pedal bike… in comes the Spawn. Same thing; cost a ton of coin but they hold their value, have decent brakes, and are quite light which was the most important thing on our list. This bike has gone through 2 and will soon be passed on to the third child (plus still sell it when we’re done for a decent amount).

My feeling on bikes is you put into it what the kid’s going to get out of it, not what your money says you can buy. Sure there are $2000 bikes out there for my 6 year old, but she’s not into it that much… yet. She likes to ride occasionally with me and push herself with her peers around, so we opted for a well priced Norco that has good disc brakes and a little bit of travel to keep her from fatiguing too quickly. She also has plenty of gears that she still isn’t super sure what to do with!

My Mach 6 is next level. Definitely the smallest bike I’ve owned minus the DJ. It’s an XS and feels pint sized! I LOVE IT! Its built a bit tough for most because of the style of riding we do, but it could be built up extremely light and be an XC killer and handle some seriously technical steeps no problema! It is a good family bike as well for growing kids. I’m 5’3″, 115lb..and not growing! It can fit the older siblings and be passed down for sure! It’s a bit of an investment, but for the person who loves to ride, ride comfortably, ride aggressively, and likes to progress… it’s a sure fit!

Riding in the Utah desert. Photo by Ryan Gibb.

Stopping to investigate the caterpillars. Photo by Ryan Gibb.

Courtney Nash And The Transition Sentinel

Courtney Nash and her daughter. Photo by Eric Brown.

I can’t wait to get back in the bike park with my 7 year old daughter! Her little brother is progressing with the bike stuff as well, but skiing may be his true sport. Cleo got a 20 inch Norco Fluid and she really likes that thing. She’s learning the reality of having a full-suspension kid bike with the squish, but having to pay for the weight on the climbs.

My new bike day was just a over a couple of weeks ago and I ended up with a 2019 Transition Sentinel Carbon GX. At first I didn’t want a 29er, but after I demo’d it for a few hours, this was a quick upgrade from my Patrol. I can’t get over how well my bike corners – even at high speed. Every moment where my brain screams, “You’re going to slide out!”, I mentally and physically prepare to adjust my body position and weight, but the bike never lets go. Even through long, big, loose corners. I keep pushing it and pushing it, but the bike won’t give up. All the normal attributes of a 29er are prevalent, but the Sentinel’s performance on technical terrain and jumping were initially surprising. It took me a few rides to dial in the suspension and now I’m pretty much in love. 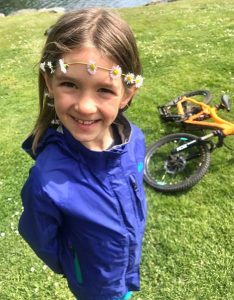 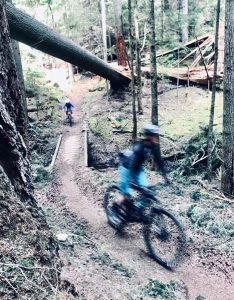 Courtney would like to thank: @transitionbikes and encourage everyone to donate what you can to the WMBC (Whatcom Mountain Bike Coalition). They’re the trail organization in Bellingham responsible for tracks including Unemployment Line, Evolution, and several more.

Sarah Paxson is expecting a bike ride – and a second child. Photo by Spencer Paxson.

I’ve been riding the Kona Hei Hei since 2013, and really enjoy the current iteration that I am on, the 2016 Hei Hei Race DL. For me, the bike suits my needs because it is a cross-country, endurance-oriented bike, but is also confident and playful on the trail. I stated riding mountain bikes in 2010, and there was a time when I enjoyed a bigger bike for hitting jumps, steep lines and pushing my skill limits. But these days I feel fulfilled with a “low air diet” and really value getting out for longer missions or short and fast outings between work and family obligations.

I ride a size medium frame, with 120mm travel up front and 100mm in the rear. The wheels are 29” diameter, and since the bike is already so light (carbon frame and nice components), I like to run heavier tires so that I feel more confident on the trails. It makes for a fun combo – a zippy little bike with good grip. For gearing, I run a 32-tooth chainring up front with a 11-46 cassette, which gives me plenty of gear range for most climbs. Finally, I have a dropper post that gets the seat out of the way for riding downhill or across rough terrain.

We are expecting our second child in August, so I’m currently using this bike as my so called “gravel commuter” to continue to enjoy time in the woods. As with baby #1, my bike serves as a motivator for getting back in shape to enjoy all the fun trails in Bellingham. 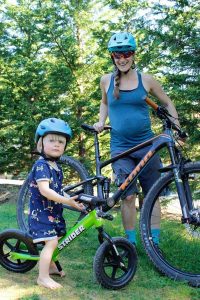 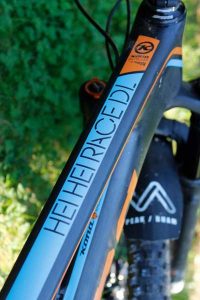 Sarah Rheuban And The Canyon Spectral

I ride a Canyon Spectral AL 6.0. It’s pretty perfect for me. The geometry and setup is versatile and can handle everything from single track to chasing my crazy boys at the downhill park. The bike worked well for me right out of the box. I haven’t really done anything to it other than swap out the saddle for a Terry saddle. The bike can go anywhere I want it to go – it’s a jack of all trades. And it’s got a sweet blacked out paint job. It’s like my little black dress, if I could wear my little black dress in the mud. I love it!

The best thing about riding a bike is getting to be outside and enjoying time with people I love most. The bikes I ride and enjoy the most are the Trailcraft Cycles Big Mesa and new Trailcraft Cycles Maxwell 26 Plus. The Big Mesa is a hard tail its light and with its 1x 28T on the front and 11-42 on the rear this allows me to tackle most the mountains around here in Colorado. Mostly I just try to keep up with our kids that are getting faster and faster every year!

I enjoy the versatility of the Big Mesa which can be ridden with 27.5 or 26 Plus tires. I prefer the 26 Plus wheels for the extra stability and traction they provide cornering on the loose granite or dry blown out trails that happen end of season. I’m not an expert rider and the bigger tires give me more confidence on the trails.

Th Maxwell 26 Plus full suspension is awesome and a lot of fun to ride – it’s going to be my new Moab bike for sure! I ride this bike in a size small and love the Maxxis DHF and DHL tires for extra grip, MRP Ribbon 140mm fork and it has a Fox Transfer dropper. Its super sweet and very plush to ride.

Ginger and her family run Trailcraft Cycles. I thought she’d be riding a different brand of bike because we’ve done reviews for the Maxwell line. When I saw her on one of her bikes for this post, I needed a little more detail. Ginger said she is 5’4″ tall and added “Our small size Big Mesa and growing Maxwell line fits riders up to 5’6” so it’s a perfect bike for growing teens and Moms”. Please follow Trailcraft Cycles through Instagram @trailcraftcycles.

Traci Thompson And The Yeti SB100

Mountain biking has allowed my family to go to spectacular places over the last several years. From red rock deserts of the American southwest to the loam of the BC, we have been able to ride together a lot as the kids have been growing up.

I like the Yeti SB100 because its climbing ability isn’t compromised by its suspension set up. That being said, it’s still a capable bike on mildly aggressive downhill terrain. This 29 inch wheeled mountain bike allows me to ride how I want. I enjoy undulating desert single track and challenging climbs. Certainly, this bike’s carbon frame and 1x GX Eagle drive train fit my style very well. If you were to place this bike on a spectrum ranging from hard tail XC racer to all-mountain thriller, it would definitely lean towards the latter. However, if the terrain gets a bit technical, the dropper post lets me easily put my weight over the rear of the bike.

The stock Maxxis DHF tire on the front is a little more burly than XC rubber, so it helps maintain traction and steering control on loose trails. For a full-suspension bike, I think the weight is reasonable. The medium sized 2019 Yeti SB100 weighs in at 29lbs with pedals and a water bottle cage.

Traci’s family runs the Mountain Biking With Kids website. She would like everyone to get out on bikes with their families and support your local trail organization through dig days and/or financial contributions.

We Choose The Best Locks For Mountain Bikes
Scroll to top