Looking for a fun experience for your mountain biking kids? The Mallen family recently traveled to the Sea Otter Classic with kids. The young Mallen boys participated in the events and festivities and loved every minute of it.

California has always been known as a hotspot for outdoor sports – biking foremost among them – and the Sea Otter Classic is no exception. Sea Otter had humble beginnings in the early 90’s with 350 racers. Since then it has rapidly grown in popularity and prestige, and this year boasted nearly 10,000 athletes and over 71,000 fans. 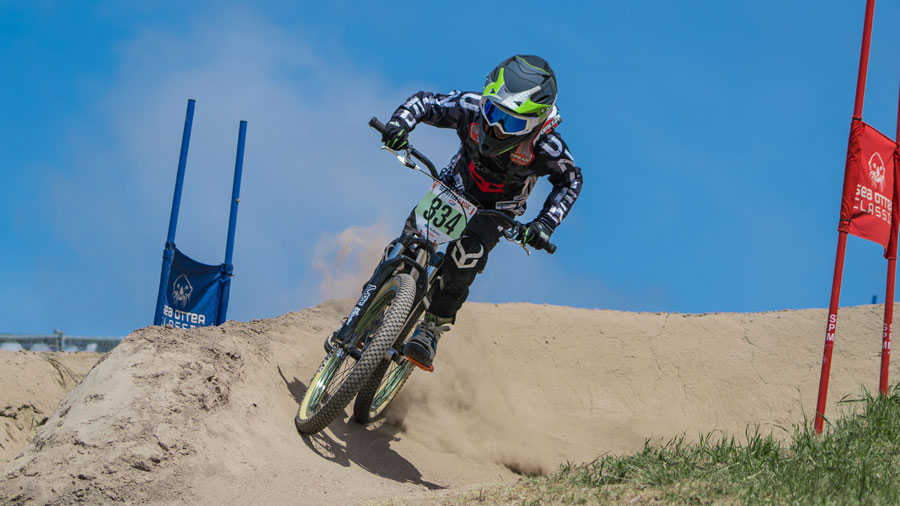 One of the Mallen twins rushes down the dual slalom track at the 2017 Sea Otter Classic. Photo courtesy of Jeremy VanSchoonhaven.

A whole slew of different events and competitions make up the long weekend. Events include include everything from mountain bike racing to slalom and short track racing. Hosted in Monterey County, Sea Otter is a hub for cyclists across a diversity of ages and skill-levels, with everyone from former national and Olympic finalists to some of the more inspiring up-and-coming youngsters in the sport. Most of the events take place on BLM land (Bureau of Land Management) and near Laguna Seca. This area offers some profound vistas that are iconic of California in particular.

From left-to-right: (1) The Mallen twins are geared up and ready to roll. (2) One of the twins takes a youth-sized eBike through its paces. (3) Cam Zink, a fan favorite for all ages was at the event at the YT Industries booth.

This was certainly the case for the Mallens. As far as outdoorsy families go, Liz, Tony, Luke, and Alex are a quintessential example of the active lifestyle, and whether it’s Tony acting as inspiration or Liz holding everything together the way only mothers can, their first excursion to the Sea Otter Classic was an adventure in itself.

The twin boys, age nine, have taken naturally to biking, and along with a cohort of friends are part of the Utah Gravity Series. Nevertheless, in their home state the competitive mountain biking is still in its infancy, so when a friend offhandedly suggested the family consider the Sea Otter Classic, it was all the incentive Tony needed. As Liz recalls, she got a text one day from her husband who said he’d signed the boys up for the downhill race. “I thought ‘Wow, okay, we’re going’,” she laughs. 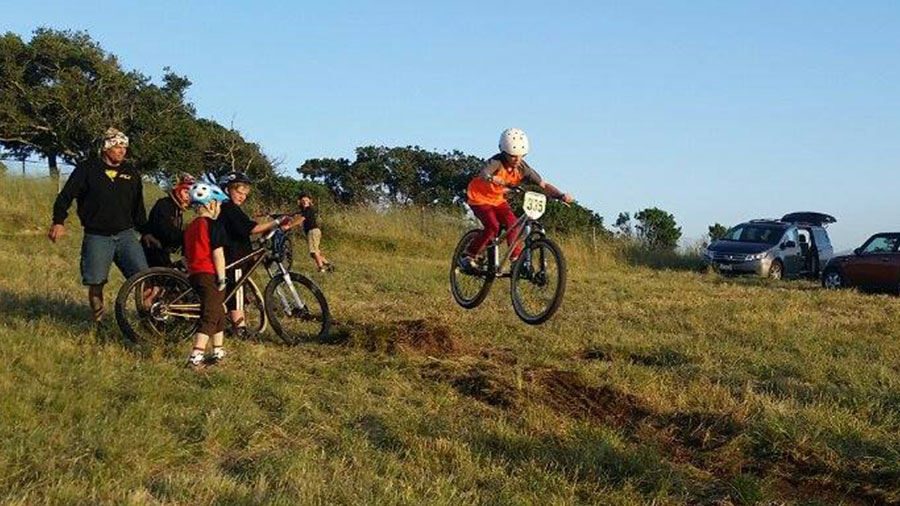 For these skilled young Utah riders, getting “acclimated” to the sea level air of central California was easy-peasy.

Bumps in the road

Under the tutelage and sponsorship of coaches Tyson Henry from Outlaw Mountain Bike and Mark Kugel from Kugel’s Gravity School, the family set their sights on California. However, shortly before the competition Tony (an avid downhill enthusiast himself) ended up crashing his dirt jumper and suffering a third degree AC separation in his shoulder and a concussion to top things off. Suddenly on her own Liz found herself in the driver’s seat – literally. She became responsible for everything from finding their camping site to registering them in the different events.

One little debacle included getting stuck in a mud bog. Liz was amazed at how helpful everyone was in getting her back on the road, a heavy effort that took them well into the night. “The people here were just so awesome and amazing and friendly and helpful,” she exclaims, recalling the events. Nevertheless it was a huge success overall, and definitely one that sticks in her mind. 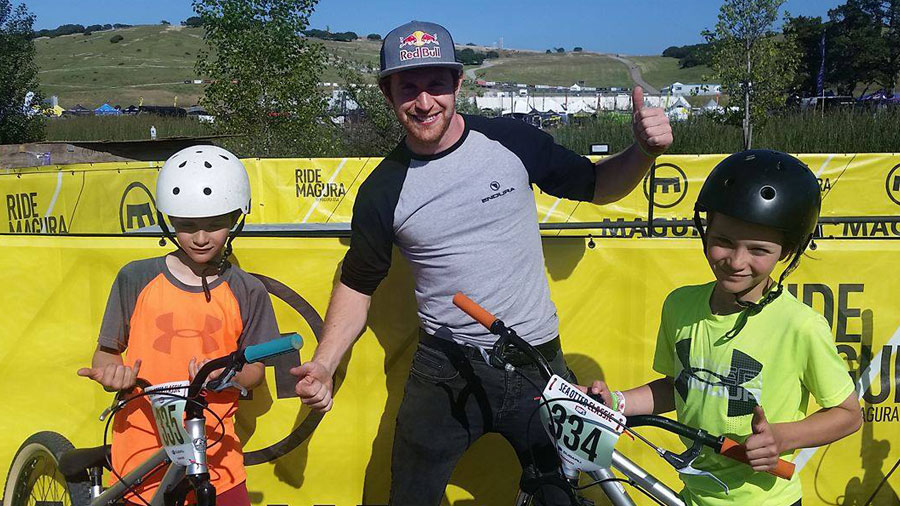 The party isn’t bonafide until this guy shows up. Danny MacAskill takes the time to ‘do it for the children’.

For the boys themselves the weekend held a lot of challenges and competition. Even in the youth division, practice begins bright and early at 8 in the morning, and with the growing success of the Sea Otter Classic one thing that unexpected visitors might not count on is the lines. This was definitely the case for Alex and Luke, and a lesson they learned very quickly – being there 45 minutes early was essential to make sure you weren’t waiting in the morning sun to get in. Their routine involved waking up at 6:30 and being fully geared up by 6:45. And even then, there was already a line up.

Right off the bat the Utah boys had stiff competition – especially from a hardcore group of ‘Shredder kids’ from Whistler, British Columbia.  Whistler has spawned many world champion contenders, including Jackson Goldstone. But despite the high standards, the Mallens were able to hold their own in both the Dual Slalom and Downhill events against the Canadians. For Saturday’s Dual Slalom, Alex earned a silver medal in the B Group. His brother, Luke almost made the medal round for the A Group. In the Downhill Race, the kids finished 9th and 16th out of a field of 39 riders. This is a testament to the growing talent in Utah. In fact, as Liz can’t help but expound, more than a few brands (from bike companies to gear outfitters) showed some serious interest in the kids.

From left-to-right: (1) The big day in queue for the downhill races. (2) One of the Mallen boys earned a silver in the Dual Slalom B Group. (3) The line-up during a practice session.

You won’t get bored!

At the end of the day though, it’s the diversity that really stood out in Liz’s mind. If you’re at all bike-inclined, it’s impossible to be bored, with daily street races that begin at 11 sharp, an Easter egg hunt (or Sea Otter Egg Hunt, as it were), and a variety of spectator matches. In her own words it’s a “whole experience for anyone who is involved with bikes … road, cycle, mountain cross country, BMX, I mean any type of bike you can imagine is here. If you are in love with bikes in general you need to come to Sea Otter.”

Tips for planning your trip

Of course, for those newcomers who are seriously considering the Sea Otter Classic it’s always a good idea to plan ahead – ideally, at least a month. With so much activity going on, being well prepared in terms of organizing your own schedule around what you want to see and – in the Mallen’s case – what you want to participate in is crucial.

The one solid piece of advice that seems to bridge all visitors to Monterey is the absolute necessity of camping. Although there are a number of hotel and accommodation choices available, camping is where it’s at. You can camp right on-site (either in a camper van or tents) to really bring the experience full circle and add a level of immersion you wouldn’t otherwise get. “The one thing I do recommend for families of kids who are racing is to camp,” Liz says wistfully – and on top of the convenience of being able to make it to events on time, camping is also a great opportunity to get to know other families and racers and to become a part of the Sea Otter Classic community. More than that, a participant in the biker culture itself. “It is like Disneyland! Literally! It’s overwhelming!” she adds excitedly.

The Mallens hail from the outskirts of Salt Lake City. And, they’re eagerly anticipating 2017’s Colorado Freeride Festival. Follow them on Instagram @thosemallentwins. They are bubble-wrapped from head-to-shin with protective gear from Demon United.

Jeremy VanSchoonhoven is a former competitive trials rider who has traveled the globe. He now focuses on taking photos instead of making paper thin, above the ground moves. Give him an Instagram follow @jeremyvanschoonhoven.

Getting Kids Ready to Mountain Bike
Scroll to top